This adventure for D&D 5e is aimed at level 4 players, but has alternate encounters for playing at level 3 and 5 as well.  It takes about 6 hours to play, and can be divided over two sessions.

In the foothills, full of lush forests, winding streams and swift rivers, it often rains, but never like this.  It has rained for weeks now, a steady downpour that is overflowing the rivers below and flooding the farmland and villages below.

It's said that people lived in the mountains once, a long time ago, but they were driven out and their towns destroyed, some say by the forest itself. Now the people of the foothills fear to enter the woods. But if the rain isn't stopped, they will all be forced to abandon their homes.  Perhaps a solution can be found in the ancient monastery of the God of Knowledge that stands at the end of the woods…

Players will unearth ancient secrets at the monastery, explore a treacherous forest with custom environmental encounters, and end with a dramatic running battle on a flooded river. It's a tale of human(oid) hubris and ancient wrongs to be righted, but also of nature as an immense and untameable force.

An accessible version is included which has been tested for screen readers.

This game is not associated with a particular setting. However, it introduces a minor god-like being who only exerts power in a small geographic area, as well as the existence of religious monks and dragonborn. The dragonborn could be changed to another race to better fit a setting.

Rain Check is a free booklet of environmental challenges drawn from this adventure.

Rain Check Map Pack is a set of rain-themed maps that can replace the ones in this adventure.  They are generally a bit more complicated than the ones in the adventure PDF. These are released under CC BY-NC, but limited commercial use is allowed in adventure modules and similar products where the maps are a small part of the final product.

In order to download this game you must purchase it at or above the minimum price of $5 USD. You will get access to the following files: 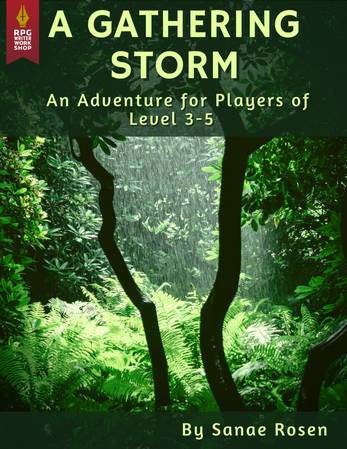