An adventure module written for the 13th Age Roleplaying Game, for a party of 1st level characters, lasting 1 long or two shorter sessions. It is setting agnostic and uses Mageflame icons.  It has been substantially modified from the version written for D&D 5E to showcase 13th Age's unique mechanics.

In the foothills, full of lush forests, winding streams and swift rivers, it often rains, but never like this.  It has rained for weeks now, a steady downpour that is overflowing the rivers below and flooding the farmland and villages below.

It's said that people lived in the mountains once, a long time ago, but they were driven out and their towns destroyed, some say by the forest itself. Now the people of the foothills fear to enter the woods. But if the rain isn't stopped, they will all be forced to abandon their homes.  Perhaps a solution can be found in the ancient monastery of the God of Knowledge that stands at the end of the woods…

This game has been substantially rewritten to be compatible with the 13th age roleplaying game. All challenges, battles and rewards have been updated to 13th age, and new, unique creatures have been created. Most importantly, the storyline and NPC characteristics has been altered to incorporate icon rolls and to be able to change based on the icons chosen by players. The adventure is built around the Mageflame icons, as described in the SRD, but can be adapted to use the 13th age Core Book official icons.

This game is setting-agnostic and includes optional, custom maps for all encounters. An accessible version is also included.

Some icons fit this game better than others.  Icons associated with nature are a good fit, as this game is about the wrath of nature against the forces of evil and corrupting magic.  A third of the game takes place in a nearby monastery, devoted to ancient and, perhaps, forgotten and secret knowledge.  The natural forces at work threaten nearby civilization, and might force associated icons to become involved. The hardest fit is any icon associated with monstrous hordes, which isn't very thematically suited to this adventure.

In order to download this game you must purchase it at or above the minimum price of $5 USD. You will get access to the following files:

Support this game at or above a special price point to receive something exclusive.

One added per $5 spent

A perfect introductory or early level adventure with an interesting array of characters, stunning maps, opportunities for roleplay, exploration, including environmental hazards and a river chase, and combat, as well a great premise. 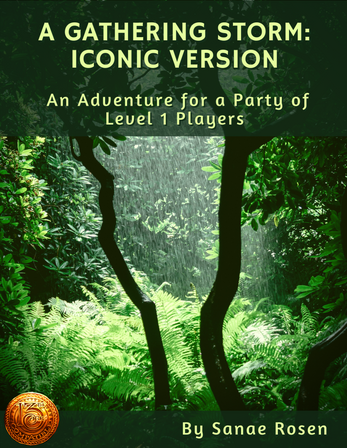 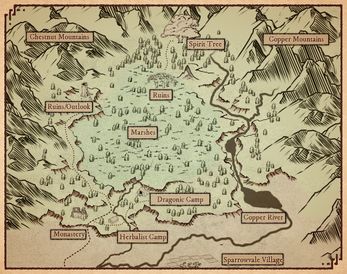